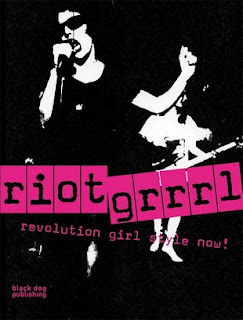 
When I saw Riot Grrrl: Revolution Girl Style Now! I immediately snatched it up. I opened the cover and scanned the contents. The first essay is titled "Riot Grrrl: The Legacy and Contemporary Landscape of DIY Feminist Cultural Activism." Holy shit. This book has got to be about everything that is exciting and vital to me.

As an outsider to riot grrrl, but participant in DIY feminist cultural activism, I found Riot Grrrl to be a profound historical document. For one, it is not canonical. Riot Grrrl starts with the movement's US roots and quickly brings us overseas to observe, in great depth, the British riot grrrl scene which I actually didn't know much about, aside from the legendary Huggy Bear. The essays range from meticulous accounts of what seems like every single British riot grrrl band and zine, to the cultural significance of grrrl zines, to just how, when, and where riot grrrl began.


Riot Grrrl makes a point to define the culture as it was created, different for every individual girl involved, with no hierarchy or centralized organization; it denotes this as a unique and empowering facet of riot grrrl. The reason I really like Riot Grrrl is that, not only is it a well-researched cultural and historical document, it pluralizes the riot grrrl movement. Using unique voices of the women involved, riot grrrl's impact is equally represented by the women who founded the movement, as well as the girls who were participating from their bedrooms.

This book is particularly helpful to someone like me, who is familiar with riot grrrl culture but would like to nerd out a little, and is interested in all the parts I missed out on. This is the first "academic" documentation of riot grrrl that I have really bothered reading, as most of it I've seen has been written by outsiders who seem to have quite a prominent media glaze over their lens.

Riot Grrrl: Revolution Girl Style Now! connects the history of riot grrrl culture to contemporary bands and actions now. It is less of a false romanticizing of a subculture, and more of an important document of the past, from the words of its creators. Importantly, we should steer away from looking to books like these as a fascination with the past. Rather, we should learn from them. Riot Grrrl as a movement has set the structure for a lot of us girls to make punk what we want it to be. I think we're all still invested in revolution girl style now, so now that Bikini Kill isn't a band anymore, let's figure out what that should look like.