As it turns out, Megan needed a banner for her Etsy shop, not just a regular image. So I reworked everything and this is the final product.
Posted by Unknown at 10:31 AM 0 comments 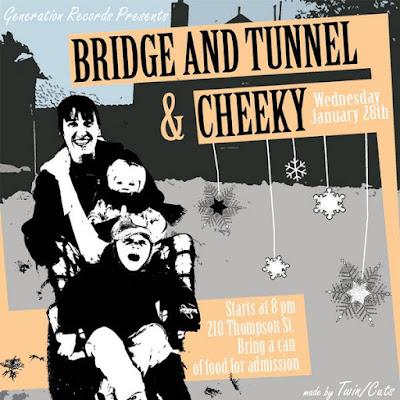 Links to this post
Labels: bridge and tunnel, cheeky, shows 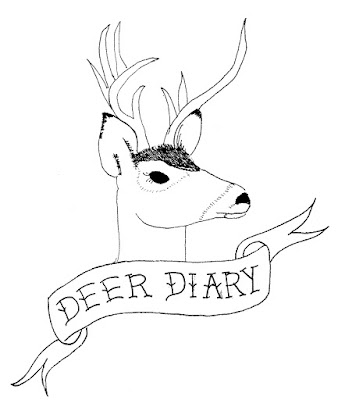 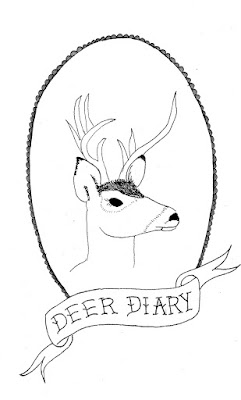 My friend Megan is going to be launching an Etsy store of her vintage and handmade goods called Deer Diary. These are the logos I drew up for her.
Posted by Unknown at 10:35 AM 0 comments

REVIEW: Marnie Stern - This Is It and I Am It and You Are It and So Is That and He Is It and She Is It and It Is It and That Is That

Here's the review I did of Marnie Stern's This Is It and I Am It and You Are It and So Is That and He Is It and She Is It and It Is It and That Is That for FEMINIST REVIEW (January 16, 2009). 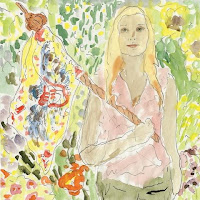 Marnie Stern was brought to my attention by one of my favorite shredders, Marissa Paternoster of Screaming Females. This could not be more appropriate as Marnie Stern is also a shredder.

Here's the review I did of Spain Rodriguez's CHE: A Graphic Biography for Maximum Rocknroll (issue #309, February 2009).

Spain Rodriguez is a radical-comic-artist-turned-radical-historian in his latest book, CHE: A Graphic Biography. Manuel "Spain" Rodriguez teamed up with author and lecturer Paul Buhle to illustrate the life and adventures of Ernesto "Che" Guevara in this entertaining and painstaking comic work. Spain, the legendary underground comic artist, is a logical candidate for this project, as his history is rooted in radical political comics. Graphically, the first artist I thought of while viewing Rodriguez's work was R. Crumb. Another logical connection: R. Crumb was the founding member of Zap Comix, and a fellow founder of the underground comics movement of the 1960's, both of which Spain was also an integral part.

[NOTE: Check out my TOP 2008 post, below! I was editing it so it back-posted to the original date, January 2nd.] 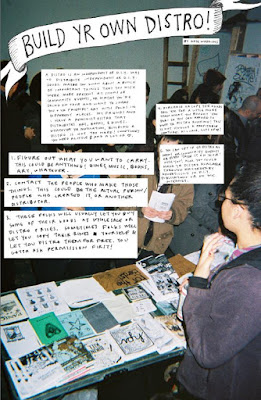 Friend + co-conspirator Jeff Rosenstock asked me to contribute to the upcoming Bomb the Music Industry! zine that will be featured in the liner notes of their new album, Scrambles. What he forgot to tell me was all he needed was some text and not a "zine page," per se. The zine will be a sort of D.I.Y. how-to booklet. Based on my experience with For the Birds, I wrote up a short and pretty generic guide to starting a distro. The timeline was short, so check the mediocre layout and the vague ideas about building a distro. Also, the final product will not involve this layout at all. Jeff is doing his own thing and formatted my edited text (not the same as in the image above) to fit the layout he is working with.

Here is the text that will be in the zine: 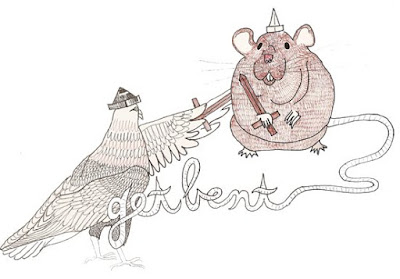 Here's another (low-res) design I did for Get Bent.
Posted by Unknown at 11:59 PM 0 comments

Links to this post
Labels: album art, get bent, illustration

Screaming Females live. I think I saw them like 25 times.

On that note, Marissa Paternoster's artwork, over + over again.

Raymond Pettibon, the silkscreen cover he did for MRR #304, and his zine, The Major Arteries.

ZINES: THE WORST, I Stopped Talking an Hour Ago, SHOTGUN SEAMSTRESS

POSTERS, ARTWORK + TATTOOS by No Guts No Glory. Especially the "MOM, I'M GONNA BE A METALHEAD FOREVER!" print, which is hanging in my living room.

The Ergs! last shows. Plus "Anthem for a New Amanda"

Hunchback + Screaming Females - split 7". So into these Neil Young covers.

P.S. Eliot! Sweetest girls and seriously, you are missing out if you are not paying attention to this band. They just keep getting better.

Cult Ritual live at a house show at the Fest. Also, the 2nd EP that came out on Youth Attack is pretty great and has some amazing packaging.

1. FOR THE BIRDS: FEMINIST COLLECTIVE + DISTRO (and all the ladies that make it possible)

6. Playing for a bunch of little grrls at Willie Mae Rock Camp for Girls [Carnal Knowledge]

7. Playing at The Fest [Cheeky]

8. My first and second vinyl releases ever. Both with Cheeky.

11. Christine visiting from Tucson (in August and now!)

15. Christmas at my folks' house

16. Burnasaurus. For many reasons, including really good friends being in town to ring in the new year, and old friend surprises, and new beginnings!

18. The adventures of Apartment #4S -- an epic year [Sept. 2007 - Sept. 2008]. This includes any and all ragers, roof hang outs, rollerskating and/or skateboarding events, and cuddle sessions on the giant couch. And cooking with Kate.