IN THE USE OF OTHERS FOR CHANGE Earlier this month Jason Andrew and Julia Gleich premiered the multimedia collaborative ballet, "In the Use of Others for Change." I was honored to contribute an image of mine to their limited edition program / artists' book. I share a spread with some of my favorite local artists: Brece Honeycutt, Deborah Brown, & Ellen Letcher! Andrew Hurst made the striking cover image, of course.
Posted by Unknown at 8:16 PM 0 comments

My update for today is kind of an embarrassing one, in the true tradition of fan-girl-ism. Fellow Kathleen Hanna Project intern Erica and I created this Call for Submissions website to collect videos about Kathleen Hanna for Sini Anderson's film The Punk Singer, and included both an instructional video made by us (get ready for the goof), and our own personal submissions. All the info is listed below. The Kathleen Hanna Project is collecting stories about Kathleen for the film The Punk Singer. We want you to tell us in your own words: Who is Kathleen Hanna, and why should we know who she is? Last month I ventured to Hoboken to check out the Screaming Females & Doodle Drag show. I wrote about it for Hyperallergic, and the piece went live this morning!

When the time came to start the show, Screaming Females squeezed onto the relatively small stage at Maxwell’s, just to the right of a blank sheet on the wall, which served as a projection screen. “We’re Screaming Females!” Paternoster squeaked out, and as the lights went down, she introduced the first artist: Tiffany Cheng, who illustrated the song “Wild,” off of the band’s latest LP,Castle Talk. The work projected onto the sheet ranged from photograph-based and stop-motion animations to felt pen drawings, grotesque and beautiful all at once. The artwork suited the music — dark, jubilant, fun, neurotic — visual and audio codes that we forget to interpret because we’re so busy enjoying it.

I'm really excited to have something up at Hyperallergic, I am a fan of the work they do. Here are some photo outtakes from the evening. 2011 has been a whirlwind thus far. I want to update you on some cool things that happened which I didn't have time to post about.

Carla Duarte of cabeça tédio interviewed me about IGGU zine and translated it into Portuguese. Again. I am so excited to have an official Brazilian correspondent. IGGU zine is thriving. It is available online through our site, at Fight Boredom distro, in person at Brain Waves and Book Thug Nation in New York, and Amigos Publishing & Shop in Providence. If you'd like to distro IGGU, get in touch with us! IGGU has been getting some really cool press, too. 90s Woman and AltDaily both mentioned the zine after Kathleen Hanna's verbal product placement (at Old Dominion University and MoMA!!). That support has meant the world to me personally. Her Girl Friday's first event was pretty amazing; you can catch some photos of it on our website by the fabulous Rayna Savrosa. Femmedia wrote a post about HGF mentioning yrs truly and my many endeavors. Thanks Femmedia!

One of my drawings is featured in the program zine for Jason Andrew and Julia Gleich's ballet, In the Use of Others for Change, closing tonight at CPR. Very Okay released a tape with Not Tapes Not Bombs Tapes with really rad artwork by girlwonder Marissa Paternoster.

I recently contributed my article "This is a Thank You Song: Reflections on the IGGU Zine Release Party" to be included in Hoax zine #5: Feminist Community.

What's next? Um, well, I've been writing this thing, you could call it my Master's thesis, for over a year now. There's a reading that will be free and open to the public at Sarah Lawrence College on May 12th. See you there?

She shares a recently received zine with us, from The International Girl Gang Underground and praises them as the next wave of the movement she’s been so dedicated to and recognized for that I’m bummed to later find out she only has one copy. She explains she doesn’t even mind when their criticism of Riot Grrrl (which is, to teens and twentysomethings, actually history instead of memory) turns on her. It’s more important they’re critiquing and learning from and moving forward with the best of the old scene while taking advantage of new technologies to advance the new wave.

Read the full article at AltDaily.
Posted by Unknown at 1:51 PM 0 comments

THIS IS A THANK YOU SONG, 2011 EDITION: Reflections on the IGGU Zine Release Party I wrote this the day after the IGGU zine release party. It's been a long month since the event, and we still have yet to hear much in terms of feedback on the project; please be encouraged to get in touch. In this post I take music and cultural production pretty seriously; if you'd like to see me get a little less serious and a little more music-y, then find me on tumblr, where I post kind of often.

So. Last night was the International Girl Gang Underground zine release party at Death by Audio.

Unfortunately, co-editor Stacy Konkiel could not make it into town (from across the country), so I curated this show and ran it on my own, so to speak, but I use those words loosely.

I was only able to book and run this successful, comfortable, well-attended, super-fun event, because of the community members and allies who participated.  It is difficult to create feminist work in a genuine way, especially in a punk context: an aesthetic, social, and musical practice that often walks the line between parody and political concern.  I read comments where an activist questioned the "safer space" policy of the evening [1], asking how we would avoid a fascist policing of our event space. Then, I read along as another person responded quite eloquently, that, "What this policy means practically, is that the organizers have the backs of survivors."  It felt good not to have to respond, arguably for the first time in my life, because someone else had done it for me.  Later, I would see more comments that mocked my choice to promote a safer space in a serious way, but, I digress. I could not have dreamed as a teenager that I would be making music, or zines, or art for my friends, that I would be where I am today.  More importantly, I could not have dreamed of having resources like Support New York or NYC Coalition for Safer Spaces that I (and others) could employ to make my own events more comfortable for everyone -- namely, survivors of sexual assault, but also, to create a space that is freer of the drudgery of everyday life (i.e., axes of oppression in its many forms).  Perhaps some people don't see the need for this kind of space because they don't feel it regularly, but, I do.

I AM HERE: CEDAR MANSION Links to this post
Labels: i am here, photos, stephanie land Today P.S. Eliot's sophomore LP, Sadie, will be released!  It's a great record, and I graciously accepted the task of creating the artwork for this one.  This is only the second LP I've designed (besides my old band Cheeky's What the Heck).  It was A LOT of work, but I feel like my design skills graduated through working on Sadie. After listening to the album and gathering some vibes about rust and bittersweetness from the Crutchfield sisters, I had an idea about what this thing should look like.  During a week-long trip to Athens, GA to celebrate the New Year, I snapped a bunch of photos and started working the concept out after that. All of the text is hand-written. Enjoy! Sadie is available from Salinas Records on vinyl and from If You Make It as a digital download. Jason Roy and I also collaborated on a poster that will be available at tonight's LP release show! 
Her Girl Friday is dedicated to empowering women in journalism and other related fields by creating opportunities for learning, networking, collaboration, mentorship, skill share, and the production and showcasing of meaningful nonfiction projects in a variety of media.

I am beyond excited about the group of organizers involved in Her Girl Friday: nonfiction writers, social media experts, filmmakers, a video artist, a comedian, and a radio engineer! I feel super lucky to be involved. Our inaugural networking mixer is TONIGHT at Brooklyn Winery! Brokelyn gave us a sweet writeup today, too (personally, I'm a fan of the Lois Lane panel).

We also just launched our official website at hergirlfriday.net!

Links to this post
Labels: her girl friday, mixer

DON'T YOU STOP, WE WON'T STOP

or "My Night with Le Tigre" If you squint, you can see my name rolling during the credits!

& after the show it's the after party... Kate wrote a sweet post about the DVD and the premiere, too. We met through Kathleen! & my sister came to town to celebrate!

Thank you friends for sharing this special night with me, and thanks to Kathleen for mentioning the International Girl Gang Underground zine at MoMA!  I think my mantra for 2011 should be something about dreams coming true.

[Flash 9 is required to listen to audio.]
Kathleen Hanna recently did a presentation called Herstory Repeats at Old Dominion University in Norfolk, VA.  She used the term "feminist continuum" to discuss where she sees herself in feminist history, which is obviously exciting to me; but perhaps even more exciting, is that she mentioned the International Girl Gang Underground zine.
Thankfully, someone who was at the presentation grabbed a snapshot of Ms. Hanna and some audio of the lecture and their great Q&A section.

…They started this thing called the International Girl Gang Underground. They just put out this fanzine, I just got it last week, and it has sections like 'histories and critiques.' But what they're doing is they're looking through the stuff that we did and they're analyzing it. They're saying what they think sucks about it and what they think is cool. They're trying to take over what we did and make it make sense to them, and that just makes me feel, even when they say I'm a jerk, it makes me feel totally loved and respected to not just have people collect the CDs or stickers or something like that, but to actually participate in the work, and take it into the future and make it into something much better than it was.

I am endlessly grateful.
>> photo and audio from You Don't Dream on tumblr <<
4/5/2011: A video of the talk has surfaced, courtesy of TheLOUniverse on YouTube. 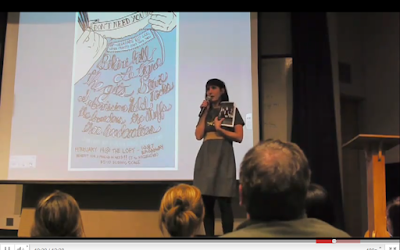