Yesterday I marched in lower Manhattan (starting at Zuccotti Park) for World AIDS Day, with my friend Roz. After the march stopped and the civil disobedience group was arrested, we made our way back to Zuccotti to see if anything else was going on. To our surprise, Third Eye Blind's Stephan Jenkins and Jackson Browne were scheduled to play a free show. We stayed until our toes nearly froze off. I was tweeting the events and the New York Observer posted one of my photos: 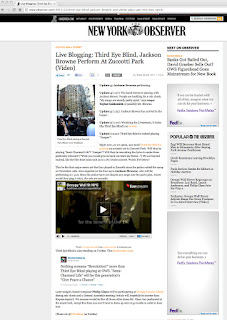 On a related note, I recently wrote a piece for Hyperallergic about OCCUPIED: Occupy Wall Street Art Show at Bluesetockings. The piece was also about my personal experience with the movement and my respect for the fact that it disrupts business as usual. Originally called "Occupying Business as Usual," the title didn't make it through the editing process.

The general vibe I’ve been hearing from a lot of people is “I don’t totally agree with the OWS protesters but … ” and then some message of, well, agreement. I have been feeling the same way, but deeply passionate about the space OWS has opened up for dialogue: political, social, economic and artistic.

As cultural critic Jay Smooth said, “It’s just specific enough to catch that basic sentiment that so many people share, and it’s just vague enough to let many people come to it with many different shades of that sentiment.” The OCCUPIED art show is a little like that.

From political posters of all sorts to handmade signs (like those seen at Zuccotti and in the streets) to more traditional art pieces, OCCUPIED was clearly the result of an open call for submissions, which is, obviously, appropriate.

You can read the full article here. 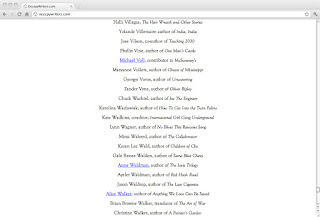 I also want to mention to my fellow writers -- especially zine authors and editors -- you can add your names to the Occupy Writers list. While I am a contributing writer at Hyperallergic, I was curious to see if my editing International Girl Gang Underground would be appropriate for this list, and I got an emphatic yes as a response. Occupy Writers is encouraging anyone on the list to write original material about the movement.
Posted by Unknown at 2:03 PM