TWO THINGS OUT OF THE PROVERBIAL BLUE:

1. Cheeky's long-promised (and I thought potentially never to exist) split 7" with everyone's favorite Appleton, WI trio, Tenement, is now available as a co-release from Rally Records and No Breaks Records.

There are only 400 copies available so get your copy here, quick. We recorded this song during the What the Heck sessions back in 2009. I'm happy that we not only get to do a release with Tenement, but with Amos' cover art.

A lower point of 2011 was leaving my latter band, Very Okay. After graduating Sarah Lawrence and beginning an internship at Hyperallergic (while also working two other jobs) I just couldn't fit music into my schedule. Some of us have moved on to new bands, to new cities, and others of us just hope to get a dog (ahem), but people are still kind enough to give us a holler every now and then.

2. One of those people is author Tao Lin, who gave us a shout-out in his interview with friend and music comrade Jeff Rosenstock this week at Vice Magazine. Someone also made us fan art. 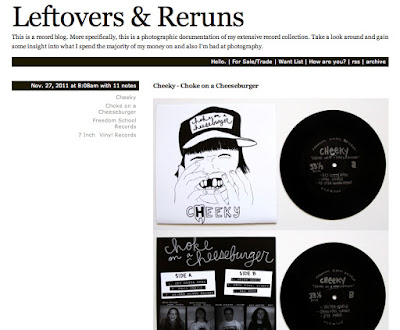 Another exciting post I found was from "Leftovers & Reruns" on tumblr, who uploads scans of his record collection. He scanned Cheeky's Choke on a Cheeseburger EP, which I did the art for in 2007.
Posted by Unknown at 1:27 AM